A product with tradition!

The inventor of our mutes, Ernst Ratzek, incorporated his experience from almost fifty years as a musician, conductor and orchestra leader in our product. Together with his son Thomas he created trumpet mutes with a very special intonation.

Tradition means for us to combine the experience of Ernst Ratzek with modern manufacturing techniques in order to achieve very low weight and easy response.

Over a period of six years, the product has matured and has been optimized for production in small series. 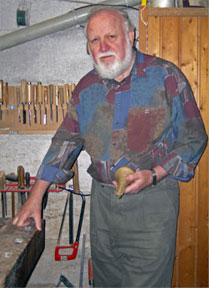 Ernst Ratzek, born in 1932 in Niedermühl (Südböhmen), has always been involved in music.
At the age of 22, he founded the Kolping Blasorchester in Offenau together with his father and was the conductor of this orchestra for 50 years. He also conducted, among others, two male choirs, with which he won several contests.
In 1992 he won, as an award in recognition of particularly meritorious and promotional activities with brass and folk music, the “Sonder-Ehrennadel in Gold” of the State of Baden-Württemberg.
At the advanced age of 68, he, together with his son Thomas Ratzek, developed mutes for trumpet and piccolo trumpet. After his death in 2006 firstly no mutes were produced. Now we are manufacturing mutes again with the same love and care, continuing the legacy of Ernst Ratzek.